X-linked agammaglobulinemia (XLA) is the most common cause of agammaglobulinemia present from birth. Patients with XLA lack antibodies, they are prone to developing infections, which frequently occur at or near the surfaces of mucus membranes, such as the middle ear, sinuses and lungs, but in some instances can also involve the bloodstream or internal organs.

It is commonly caused by a mutation or deletion in the BTK gene which prevents the normal development of B lymphocytes, resulting in a severe antibody deficiency. The mutated gene is located on the X chromosome, so only boys are affected.

XLA testing is usually recommended for any child with recurrent or severe bacterial infections, particularly if the patient has small or absent tonsils and lymph nodes. First, an evaluation of serum immunoglobins may be conducted. In most patients with XLA, all the immunoglobulins (IgG, IgM and IgA) are markedly reduced or absent with some exceptions. If the serum immunoglobulins are low or if the physician strongly suspects the diagnosis of XLA, the B-cell number in the peripheral blood may be measured using flow cytometry. A low percentage of B-cells (nearly absent) in the blood is the most characteristic and reliable laboratory finding in XLA or Autosomal Recessive Agammaglobulinemia (ARA) patients. The diagnosis of XLA can be confirmed by examining the absence of BTK protein in monocytes or platelets or by detecting a mutation in the BTK gene

The early diagnosis of XLA patients is highly desirable because the incidence of chronic lung disease in these patients results from delayed diagnosis and is one of the most detrimental factors on the prognosis and quality of life. Most patients who receive immunoglobulin or prophylactic antibiotics on a regular basis can have relatively normal lives.

The incidence of XLA is approximately 1 in 250,000 male live births and has no ethnic predisposition. 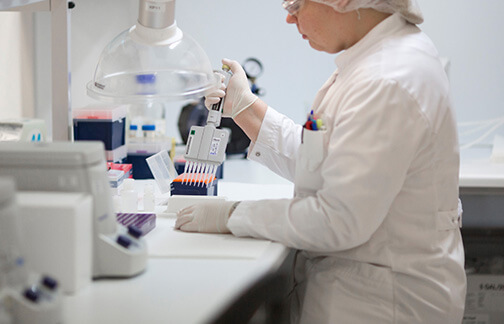 A complete system for SMA, SCID & XLA screening, from sample to results. The design of the EONIS assay and system enable automation without compromising the sample traceability from punch to result.
Learn More